My html folder structure is as below. this is located in /var/www folder

To serve these files using NGINX, you can use following NGINX configurations. I have given two version and both works. First version is using root directive and second is by using alias directive. personally, i prefer alias as it easy to understand.

Here is another version using alias. Please note here you dont need to add "/" after sub in location block

AWS multiple services for analytics. Right from simple S3 select to EMR cluster which is managed hadoop. In this arcile we will analyse all these offering and understand differences and their use cases:

Amazon Athena is an interactive query service that makes it easy to analyze data in Amazon S3 using standard SQL. Athena is serverless, so there is no infrastructure to manage, and you pay only for the queries that you run. You don’t even need to load your data into Athena, it works directly with data stored in S3. 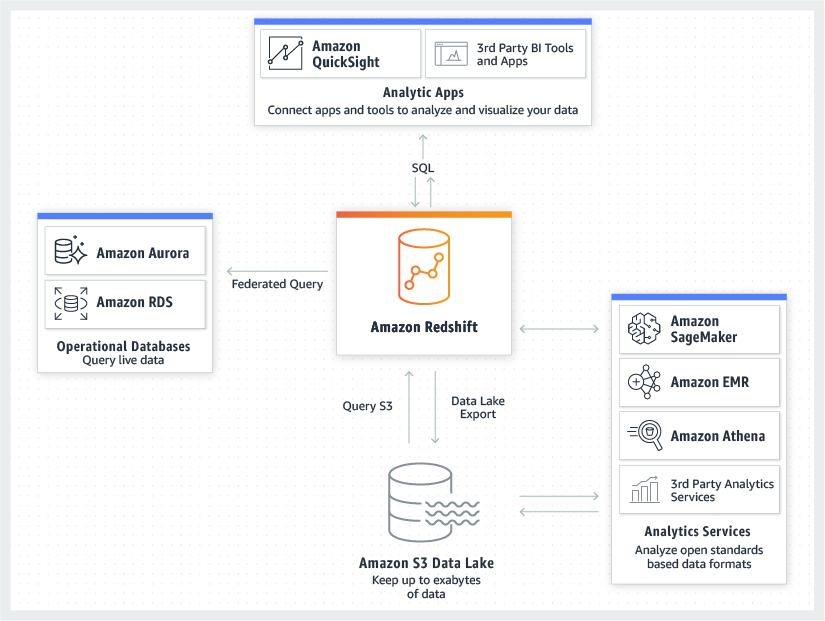 How these work together 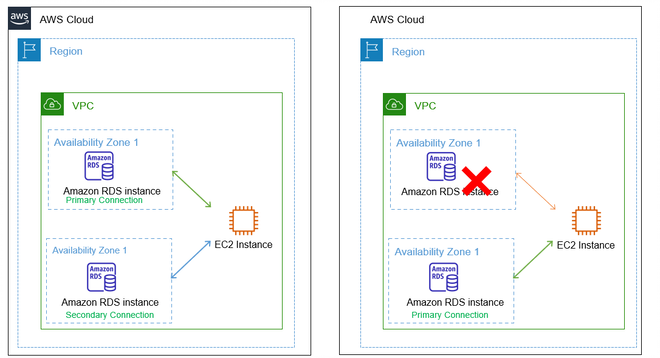 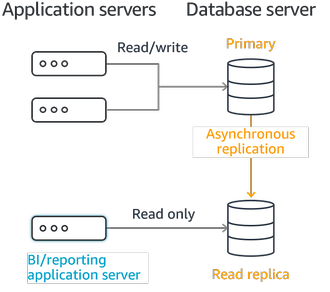 Direct connect is mainly used to establish a dedicated private connection between an on-premises network and AWS network. This could provide a higher bandwidth than your standard ISP. Storage Gateway on the other hand is for hybrid cloud storage. This service can help you in situations where you want to save on storage costs by moving some/most of your data to AWS Cloud with low-latency access (just as though you’re accessing them within the same disk).

AWS Direct Connect is compatible with all AWS services accessible over the Internet, and is available in speeds starting at 50 Mbps and scaling up to 100 Gbps.

Your Site-to-Site VPN connection is either an AWS Classic VPN or an AWS VPN.

A Site-to-Site VPN connection offers two VPN tunnels between a virtual private gateway or a transit gateway on the AWS side, and a customer gateway (which represents a VPN device) on the remote (on-premises) side.

A transit gateway is a transit hub that you can use to interconnect your virtual private clouds (VPC) and on-premises networks.

VPN is a great connectivity option for businesses that are just getting started with AWS. It is quick and easy to setup. Keep in mind, however, that VPN connectivity utilizes the public Internet, which can have unpredictable performance and despite being encrypted, can present security concerns. Amazon have lots of services and some of these are kind of overlapping. While attempting practice Tests, I used to get confused about what is exact different between these and when to use which server. Below article is my notes about these services.

VPC stands for virtual private cloud. VPC is a virtual network dedicated to your AWS account. It is logically isolated from other virtual networks in the AWS Cloud. You can launch your AWS resources, such as Amazon EC2 instances, into your VPC.

Following are the key components of VPC

When new account is created, following components are already created for you.

When you create new VPC, it does not create subnet. In each region, AWS automatically provides a default VPC with default subnets, a main route table, a default security group, and a default NACL.

If you delete VPC following is deleted

Valid IPv4 prefix lengths range from /0 to /32. Although you can specify any valid IP range for your VPC CIDR, it’s best to use one in the RFC 1918 range to avoid conflicts with public Internet addresses.

Point to be noted:

A subnet is a logical partition within a VPC that holds your EC2 instances. A subnet lets you isolate instances from each other, control how traffic flows to and from your instances, and lets you organize them by function. For example, you can create one subnet for public web servers that need to be accessible from the Internet and create another subnet for database servers that only the web instances can access.

A subnet can exist within only one availability zone

To connect to internet following is needed

An Internet gateway gives instances the ability to receive a public IP address, connect to the Internet, and receive requests from the Internet.

A route table contains a set of rules, called routes, that are used to determine where network traffic from your subnet or gateway is directed. Main route table The route table that automatically comes with your VPC. It controls the routing for all subnets that are not explicitly associated with any other route table.

IP routing is destination-based, meaning that routing decisions are based only on the destination IP address , not the source. To enable Internet access for your instances, you must create a default route pointing to the Internet gateway

When you create a security group, it doesn’t contain any inbound rules. Security groups use a default-deny approach, also called whitelisting, which denies all traffic that is not explicitly allowed by a rule.

Inbound rules specify what traffic is allowed into the attached ENI. An inbound rule consists of three required elements:

Like a security group, a network access control list (NACL) functions as a firewall in that it contains inbound and outbound rules to allow traffic based on a source or destination CIDR, protocol, and port. Also, each VPC has a default NACL that can’t be deleted. But the similarities end there.

A NACL differs from a security group in many respects. Instead of being attached to an ENI, a NACL is attached to a subnet. The NACL associated with a subnet controls what traffic may enter and exit that subnet. This means that NACLs can’t be used to control traffic between instances in the same subnet. If you want to do that, you have to use security groups.

Inbound rules determine what traffic is allowed to ingress the subnet. Each rule contains the following elements:

Outbound Rules As you might expect, the outbound NACL rules follow an almost identical format as the inbound rules. Each rule contains the following elements:

When you make a change to a NACL or security group rule, that change takes effect immediately

Although network address translation occurs at the Internet gateway, there are two other resources that can also perform NAT.

AWS calls these NAT devices. The purpose of a NAT device is to allow an instance to access the Internet while preventing hosts on the Internet from reaching the instance directly. This is useful when an instance needs to go out to the Internet to fetch updates or to upload data but does not need to service requests from clients.

When you use a NAT device, the instance needing Internet access does not have a public IP address allocated to it. Incidentally, this makes it impossible for hosts on the Internet to reach it directly. Instead, only the NAT device is configured with a public IP. Additionally, the NAT device has an interface in a public subnet 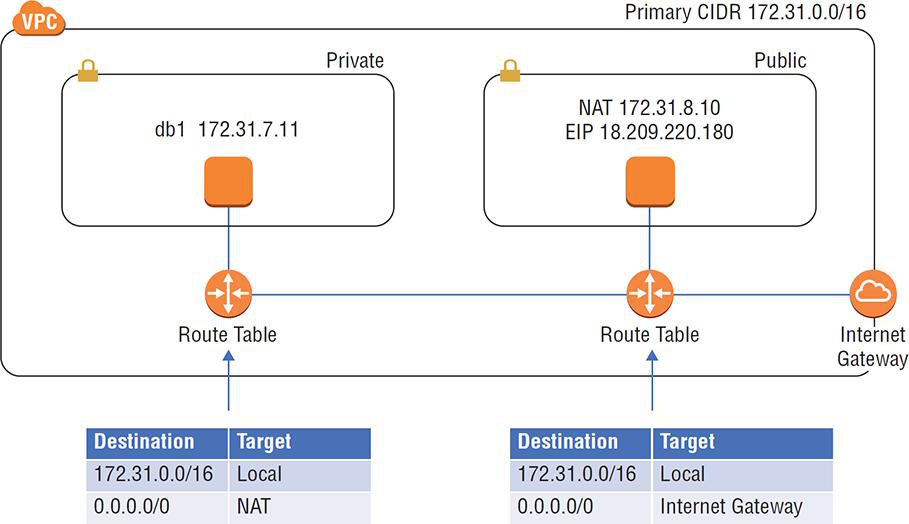 A NAT gateway is a Network Address Translation (NAT) service. You can use a NAT gateway so that instances in a private subnet can connect to services outside your VPC but external services cannot initiate a connection with those instances.

When you create a NAT gateway, you must assign it an EIP. A NAT gateway can reside in only one subnet, which must be a public subnet for it to access the Internet. AWS selects a private IP address from the subnet and assigns it to the NAT gateway. For redundancy, you may create additional NAT gateways in different availability zones.

A NAT instance is a normal EC2 instance that uses a preconfigured Linux-based AMI. You have to perform the same steps to launch it as you would any other instance. It functions like a NAT gateway in many respects, but there are some key differences.

Unlike a NAT gateway, a NAT instance doesn’t automatically scale to accommodate increased bandwidth requirements. Therefore, it’s important that you select an appropriately robust instance type. If you choose an instance type that’s too small, you must manually upgrade to a larger instance type.

Ingress traffic is composed of all the data communications and network traffic originating from external networks and destined for a node in the host network.

Egress traffic is the reverse of ingress traffic. Egress is all traffic is directed towards an external network and originated from inside the host network.

If you want your instances to be accessible from the Internet, you must provision an Internet gateway, create a default route, and assign public IP addresses. Those are the basics. If you choose to use a NAT gateway or instance or a VPC peering connection, you’ll have to modify multiple route tables.

It captures the ip logs. Can be stored on S3 and send to CloudWatch logs.

Here are sample design presented in our of the AWS presentation 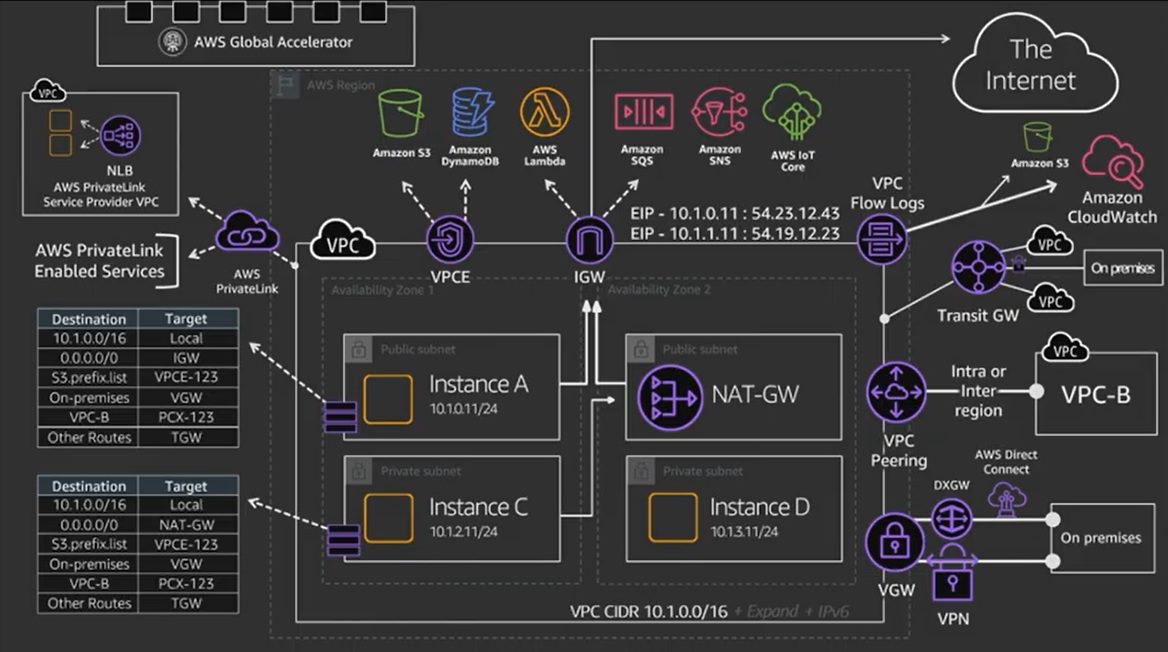 Hope this is helpful !

Please not the additional details at top and before closing bracket of server block. For installation of multiple please check post How to Install WordPress Multisite

When you create Ubuntu server, by default timezone is of the same regions where host is located or predefined by the cloud service provider. If you need to check the timezone use following command.

You can check the timezone using following command as well

Now let us check how to change the timezone. First you need long name of timezone and you can fetch it using following command

To change timezone, you need to run below command

In current scenario, I need to change it to IST (Indian Standard Time). Here is the the output of current timezone after changing timezone

When NGINX is installed it will create a folder called as /www inside /var/ directory in Ubuntu. Here is how folders look like before installation

Please note there is no /www directory as we have not installed NGINX yet. Please note that, if you have any other server such as apache in install, /www will already be there.
Now let us install NGINX.

NGINX registers itself as a service with ufw after installation.

Finally just to ensure NGINX is running file, you can check the status using following command

Hope this is helpful. Please let me know if you have any query or getting any unexpected error.

Tag line for django says “The web framework for perfectionists with deadlines.” and most would agree. django is rediculously fast to implement, its fully loaded with lots of utilitis, its secure and at the same time its highly scalable. some of the most popular sites like instagram, pinterest are built with django.

Let us get our hands dirty by getting started with django instead of talking about django features.

Which django version should I use ?

Here are the details about djnago release. you can choose latest version, however, I will stick with LTS version

Currently I am using Django 2.2 for most of my projects.

Which Python version should I use ?

You can check the version as below

here is the output

Now that your environment – a “project” – is set up, you’re set to start doing work.

Here is the output

Hope this is helpful…